August came and I made another site visit to the house in Mérida.

All the walls are up and the roof blocks are in place as the house starts to take its final shape. 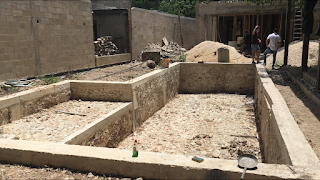 I know I've said it before, and I'll say it here, again. The pool is big. I was there when the hole was dug and I've seen photos and video of it after they formed it up to its final shape. But seeing it in person it seems somehow more massive. Is this a complaint? No, dear reader, it is not. I am beyond excited to float around in that sucker someday.

I asked about the possibility of installing fancy toilets with built-in bidets, because putting toilet paper in a little trash can for later disposal did not seem like something that was going to fly, long term. I mean, I'm not sure we're bidet people, maybe we should be, but we're not, yet. Thankfully, I was informed that our system should be able to handle TP, no problem. Begone, TP trash cans!

I took a video and some photos, but I always feel a little in the way of the workers. They're trying to do their jobs and this tall, fat gringo keeps getting in their way. 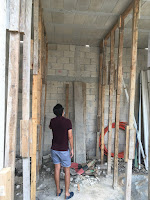 I noticed the skylight in the kitchen wasn't in, but our architect who was with me noticed it first and was already on the phone about it.It was a short trip and I was on my way home on Wednesday (see my travel post for more on that) a day before Hurricane Grace was scheduled to start rolling in across the peninsula.

By the time it reached Mérida it was mostly high winds mixed with some rain. It was enough to take down power lines and trees in the area.

Including our tamarindo tree.

When I was down in May as they were working on the foundations I saw that they were really hacking at the roots on the west side of the tree. It needed to be done, I guess, in order for the foundation to go in. I didn't say anything because I figured they knew what they were doing. Also, they were already deep in and there was no going back. I thought, maybe the ground is so hard, the missing roots won't matter so much if the remaining roots are deep enough. 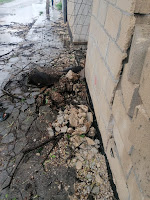 The tree reared back to the west and fell against the newly built front wall of the house. A little damage was done at the top of the structure, but nothing serious.

The contractor and the architect said they were trying to decide how to save it, but I knew it was done.

Even if you could right the tree back into position, there was no guarantee the next storm wouldn't send it crashing again. This time into the finished house. Or worse, into a car or person. Grace wasn't even a particularly strong storm, so what were the chances against something more severe?

A week later and they had come to the same conclusion. I think it was harder for them to accept than it was for me. 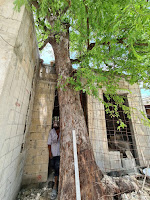 They had a fondness for the tree that I, honestly, didn't share. It was a big tree that provided a lot of shade to the future house and the street beyond. It had been there for many, many years. From that perspective, it is very sad.

From a build perspective, it's sad because if we were going to get rid of it we could have just built the house all the way to the street.

But my sadness over the tamarindo only goes so far.

I won't be sad to not have to be picking up the poop shaped pods it drops everywhere.

I won't be sad that it won't be tearing up the sidewalk with its roots. 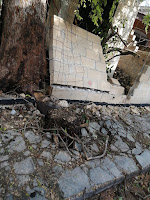 So, the tree will go and I will get to pick its successor. A tree with a deeper, less destructive root system. Something that, if it drops something, I can choose what it drops. A tree that will, hopefully, not develop such a large trunk to block the view of the front doors. Along with the ability to move the tree to a position that fits the aesthetic of the house a little better.

So, while it was sad to lose this grandfather of a tree, there is plenty of silver lining in its passing. And ultimately, that nobody was hurt and no serious damage was done is a blessing. The tree will go, and it will go quietly.

I will be back in Mérida in a few months and it should be an exciting time to see how far we have progressed by then. It's always an adventure.