Mid-December and it was time to head back to Mérida. Yes, I had just been there like 5 weeks earlier, but another payment was needed and this would likely be my last visit before completion of the house.

Another quick trip and the flights down all went off without any problems.

Saturday night off the flight, checked in and heading straight to Zinc for my homecoming meal. Then to sleep off the jet lag.

Sunday was a free day for me. Where the last two days of the trip would be full of happenings, Sunday was open and without commitment.

I was up early, as usual, and wandering the city. I made my way over to the house. There were blue paint swatches on the front to choose from. I took pictures on my phone and gave them all good looks. Yes, if I haven't mentioned, the front color on the house is going to be a blue color. Hopefully not too Smurf-like.

Walking back from the house I decided to see if I could actually walk the dirt trail that started from Calle 47 on the east side of la Plancha and cross to the west side, being deposited back onto Calle 47. The answer to this question is most definitely yes. It made getting to places like Micaela and even back to Paseo Montejo super quick.

Back to the hotel to cool off. Yes, even though it's winter and it should be cooler, Mérida is not seeing a very cool winter. It wasn't nearly as humid as in other times of the year, but I was still a might bit sweaty.

After some rest and eating some snacks, acquired at the OXXO adjacent to the Hyatt, I decided to go out again for a walk.

Wandering around Centro, I started snapping pics of blue houses for reference as I made my way along. Eventually, I wound my way back over to our casa. This time to inspect the swatches in the hard noon-day sun.

Back to the hotel to cool off and then to Hennessey's for some food and football before hitting the hay. Monday would be a busy day.

Up early Monday, again as usual, and off to the bank to take care of some details there. Well, I thought it would be a quick in and out, but it took a lot longer than expected.

Two and a half hours later I was out and off to the house site to meet with Fabián.

This would likely be the last time I would visit the house before construction was complete, so I had a list of things to go over with him. Some probably stupid questions, other questions about progress and inspection types of things.

Another two and a half hours and Fabián was giving me a ride to my third stop on the Monday list, meeting with a potential property manager.

I met them at their house where they had lunch prepared and we discussed how we all ended up in Mérida.

We then drove back to the house so they could see it. They added some good additional questions for me to ask Fabián and crew.

About two and a half hours later I was finally back at the hotel. A long, but productive, day.

I called Angie to tell her about my day and then hit the shower and sprawled out on the hotel bed to relax for a bit. Then I was up and out the door again.

There is a new restaurant in our future La Plancha neighborhood I wanted to try. Cadadia is open each day (hence the name) at 5 p.m. and is on the corner of Calles 53 and 46, right across from the abandoned warehouses of the old train station.

The drinks were excellent and so was the food. I didn't spend a lot of time there because I was so pooped from the full day I had, but very happy to see that place exist in our neighborhood. 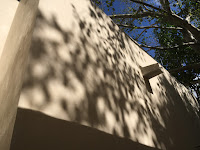 I made my way back to the hotel and came across some sort of Christmas parade, before finally getting to my room and crashing for the night.

Tuesday was going to be a busy day as well, so I needed my rest.

Angie had befriended the artist who is working on our paintings for the house, Ihovany. They chat frequently and she had told him I was going to be in Mérida for a few days. It turns out his wife was going to be in town as well and they wanted to hang out with me.

Also, Angie had bought them both sneakers (expensive in Mérida) as Christmas presents. Which meant my backpack was stuffed with two pairs of sneakers and not a lot of room for clothes for me. I chose carefully what I would take and wear. I did not choose wisely. I packed expecting those cooler temps. But no complaints, I'd rather sweat than freeze.

To start the morning I got my COVID test so I could fly out Wednesday morning. Then Ihovany and his wife, Arelys, picked me up at the hotel.

Side note, neither one of them spoke English and my Spanish is... well... a work in progress. 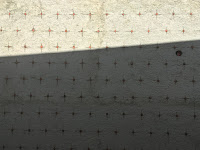 We stopped by our house so they could see it and Ihovany could see where his art would hang. Then stopped by the house where they were staying. Then off again to the north of Mérida to eat Cuban food at Mi Habana. Then to pick up a chain for Ihovany's motorcycle. Then to WalMart in search of a scale to weigh their luggage.

They were traveling back to Cuba in a week and were shopping for presents for their children and other basic necessities that were hard/impossible to find in Cuba. Their bags were stuffed with toothpaste, spices, toys and anything else you might imagine.

It was a fun day, but I was tired by the time I returned to my hotel room. I had squeezed out so much Spanish from my brain. Words and phrases I never thought I would remember, but there they were.

I played back our conversations in my head. Analyzing what I said wrong and what I should have said. They were far too sweet to correct me, but later I realized I had been saying certain things incorrectly and felt a little embarrassed.

But, overall, Google Translate didn't have to make a lot of appearances during the day. My childlike grasp of Spanish wasn't too shabby. Definitely room for improvement, tho.

The flight home the next day was generally smooth, but there were insanely high winds cancelling and delaying flights in Denver. Would I make it home? Hard to say.

On the plus side, all my traveling had earned me silver status with the airline and I got a first class bump from Mérida to Houston.

My flight from Houston to Denver was delayed 30 minutes due to the weather. With an hour and thirty minute layover in Denver, and likely my flight to Bismarck delayed as well, no problem.

But then, my flight to Bismarck kept listing as on-time. And when we landed in Denver, no gate to park at. My hour-thirty was dwindling. By the time I would get off the plane, it would be down to less than thirty, and in a different terminal at the very end of the hall. It was a 20+ minute walk in good times.

The airport was packed with people with no place to go. Products of delayed and cancelled flights. People sitting around, camping out on floors and children playing on the moving walkways to amuse themselves.

And then here comes this fool (me) running past. Seemingly the only person in the entire airport with an on-time flight.

I reached the gate with boarding in progress and enough time to stop and breath before getting on the flight. I made it! And I made it home, right on time.

Until next time. See you in the new year!