I have a post about my latest trip to Mérida and visiting the house coming up. But first I need to get up high on my soapbox and rant a bit.

I am very grateful to live in the world today and have the ability to get on a plane and fly wherever, almost whenever. I also understand that times right now are hard for businesses and especially the airline industry.

But with all that being said, United Airlines sucks.

The flight down was marred by late flights caused by missing pilots, missing gates and non-working jetways.

The flight back was marred by late flights caused by missing luggage which caused me to miss my flight home and rebook to another, much later flight.

But all of that stuff is forgivable, things happen when you travel and you have to just roll with it sometimes.

When I got home, Angie told me she wanted to go next time I go to check progress. It's harder for her to get time off so we started planning the trip right away.

I booked the flights for October and started searching for an AirB&B to stay at.

Then, a couple days later I get an email from United that they changed one of our flights.

This happens from time to time. Time changes a bit, etc. I opened it up to look and, yeah, this wasn't possible.

They cancelled the evening flight to Mérida and put us on the afternoon flight. The flight that leaves Houston over 4 hours before we actually arrive in Houston. 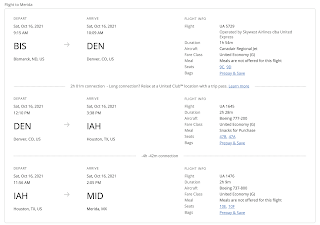 With the night flights cancelled, this meant the morning flight leaving Mérida was gone, as well. Meaning the return trip would have us arriving in Houston hours after our flight leaving Houston had departed.

I tried changing the flights online, but no luck. I called United and sat, listening to the hold music, for an hour and a half.

When an agent answered she read over my itinerary and asked what she could help me with. It seemed obvious, but I tried explaining it to her. I didn't seem to make a dent with my explanation. She then read, out loud, my entire itinerary and followed up with "what seems to be the problem?"

Ma'am I am not a wizard, nor do I possess a time machine. I cannot get on a flight that left 4 hours before I arrive at the airport.

Is it really that hard to understand?

She could change our first flights to earlier. That would get us to Mérida in the afternoon, which would be nice, but we would have to traverse two 40-minute layovers. That seems unlikely, especially considering my experiences from only days earlier still burning in my head like PTSD.

This scenario also doesn't solve our return home, which would still require us to stay a night in Houston.

Our other option would be to fly through Cancun, and then take the 4-hour ADO bus ride to Mérida. Not something I'm eager to do. Not so much because of the bus ride, but because getting through immigration/customs in Cancun is an ordeal, in my experience. But if it's our only option, then it is.

But in order to switch to that flight, we'd need to pay an upgrade fee since the Cancun flights are more expensive.

Are you serious?! You screwed us over and then you want us to pay extra for the privilege of flying to the wrong city and sitting on a bus for 4 hours?!

Well, then, I'm informed, the only option is to refund our fare.

I have a lot of miles with United, this flight would have moved me up a tier in my mileage ranks. I considered buying a United credit card in order to get more perks since I fly with them so much. I was actively looking at the United Club subscription offer, since once you consider how much you spend eating at an airport restaurant or buying snacks from the kiosks, the club fee doesn't look so bad.

I'm not just a random Joe who flies United once every ten years. This is how they treat the people who fly with them regularly and loyally?

I am thankful I never purchased a credit card through them or the United Club subscription. I'd rather walk than fly United again. They're more beholden to algorithms and efficiency than customer service. Let algorithms pay for tickets on their flights, because I sure won't.