An anniversary in Mérida

It was our 10th Wedding Anniversary in August and Angie wanted to spend a few days in Mérida as celebration of it. She found some cheap tickets and I found us a nice house to stay at and soon we were back.

End of August means intense heat, of course. I'd been down in the summer months, but this would be Angie's first real experience with the humidity.

And it was spicy. Every day went a little something like this.

Get up in the morning, go for a very short walk.

In the afternoon, make some lunch at the house and then go into the bedroom and turn on the TV and the AC and fall asleep for a little nap.

Wake up, jump in the pool again. Get ready and go out to eat dinner.

Come home, jump in the pool. Take a shower. Go to bed.

I know, it sounds exciting (sarcasm.)

But what it lacked in excitement, it made up for in relaxation.

We also found a new restaurant that we fell in love with, Zinc. By new, I mean it had literally only been open a few weeks when we went there. It's on Paseo Montejo, across the street from the twin mansions.

Embarrassingly, we went three times while we were there. Always trying something new.

We also tried Flamante Burgers, which I enjoyed, but Angie was less thrilled over. She likes her burgers super thin, like cardboard thin. I can't defend her terrible taste in hamburgers.

We also tried the pizza place, E Core, on the opposite corner to Flamante. The first floor is the large brick oven where the pizzas are made. It is already hotter than hell in the city, next to that oven it was somehow worse. Yet there it raged and pizzas baked.
Unlike the person who had to toil next to it to make our pizza, we sat in the AC upstairs. We had an eggplant parm (I'd never had eggplant, and I probably won't again) and an amazing pizza.

That was also the night we came home and on the way to the pool, as I was going to open the screen door, I saw a giant tarantula hanging onto the screen. There would be no swimming that night! 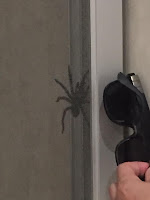 One of the other things we did on this trip was more of a fun thing for Angie. Her photography business has been going well, and she'd been wanting to take photos in Mérida for some time. She contacted a local woman who met up with her and they took portraits around Centro one evening. It was a fun little time out and they each got some fun photos for their portfolios afterwards.

As we packed up and left the house on our way to the airport the final morning, we were saddened, knowing it would likely be a year before we would make it back to Mérida again.