A November trip and Angie's first visit to the construction site

November came and it was time for another trip to Mérida for a look at the house.

Angie decided she couldn't take it anymore and had to see it in person. This might be the only chance she gets to see it under construction. Her schedule won't allow her to come again until after it's finished, most likely.

Normally, she doesn't like traveling so much for just a handful of days.

Off we went and all of our flights went fairly smoothly. Our one flight from Denver to Houston was delayed slightly and had us on edge. In the end, the flight to Mérida was also delayed and it worked out just fine.

We landed, took a taxi to the house and after putting our bags away we went, of course, straight to Zinc for food. It's become a 'homecoming' tradition to visit Zinc right after we get into town.

Wednesday I was awake very early and walked by the house. I didn't stop to look in and I didn't even slow down. But things were coming along and it was an odd sight with the tamarind tree reduced to a stump.

When Angie woke up, we went to try to find her a coffee, which was a bit of a bust. Angie doesn't really drink coffee as much as she drinks creamer with a splash of coffee for flavor. The coffee we bought was far too light on the cream.

Failing that, we made our journey over to the house. Our official visit was still 24 hours away, but it was like the night before Christmas and Angie wanted to shake the present a little before opening it.

We stopped at the open doorways and peered into the property. Angie was clearly excited. I tried not to have us linger too long so the next day would still feel special, but Angie lingered.

Finally we moved along and made a quick circle of the neighborhood.

The rest of the day we just relaxed at the house. We both needed a break from constantly going and we only had a few days to get it all in.

The next day we met with Fabián and Alex (architect and engineer) to check out the house, for real. The house is in such an almost complete state, you can really get a feel for everything better than ever before. 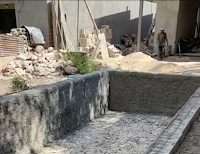 The concrete is in on the floors and it actually feels like a house. Sure, there are no windows or doors or much else that a finished home needs, but if you plopped down an air mattress I could survive well enough.

We didn't take a lot of photos, but Angie did narrate a video that she took at the house.

Other than that, we spent the rest of the time relaxing. I had thought about going to some furniture stores and pricing out some appliances and furniture, but relaxing took precedent for us both.

The trip home went fairly quickly. Up early and to the airport, on the plane and to Houston. Enough time to have lunch and then board the plane to Denver.

In Denver we were scheduled to have a 3+ hour layover. But, as luck would have it, an earlier flight to Bismarck was delayed an hour and we rushed over to see if there were any seats left for us. We'd make it home 2-3 hours early! And, what luck, they did have a couple seats for us! We couldn't sit together but that was okay if we got home sooner.

Well, we thought we were lucky. When we finally boarded the plane we sat on it for over an hour, then were told there was a problem with the steering and we'd have to go back to the gate. They let us off the plane and told us to walk to another gate. By this time, our original flight was boarding.

Ultimately, our original flight would take off 25 minutes sooner than our "new" flight. So, we kind of shot ourselves in the foot on that one. We still spent all that time at the Denver airport, but instead of spending it hanging out at a restaurant or whatever, we sat on planes.

Oh well, it was worth the shot. I say that looking back on it now, but in the moment I was heated.

And that was that, a quick trip and then I need to turn around and make a trip back in December.

As much as I'm excited to have the house completed, I had secretly hoped they were behind schedule a little just so I could space out my trips more. I'm not going to complain about taking trips to Mérida, though.