Years ago, I was searching for Casa Sisal on Google maps. Which was where we stayed on our inaugural trip to Mérida.

I was searching so that I could get a rough measurement of the pool. It was a perfect size for a pool and while dreaming about possible designs for Blue House, at the time, I wanted to know if we could fit that sized pool into the yard.

I scroll through the landscape of satellite images until I land on Casa Sisal and take a screen shot. And as I start to back out and sweep away from the area, I see this. 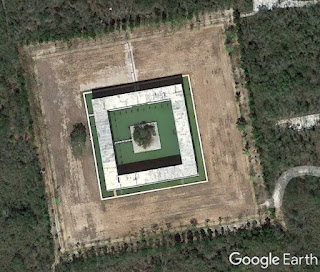 What in the actual hell is this?!

There are no labels, at the time. It's not next to any road, so there is no ability to Street View.

I look on Google Earth and step back in time to see when this was built. The images would suggest somewhere between 2010-2012.

Is it a house? If so, it's massive. The land area is almost the size of the small village nearby, San Antonio Sac Chich.

Is it some kind of government facility? Some sort of fancy wastewater treatment? But it's so far from anywhere.

How do you even google it? "large square with water merida jungle"

For years it would remain this mystery to me. A large and curious structure surrounded by water in the Yucatan jungle. I would come back and search for it and try to see if there were any updates on the map.

I'd try various Google searches. All to no avail. The structure would not give up it's secrets to me.

Sure, I probably could have asked a local about it, but no! This is a mystery I need to crack!

And finally, late last year, I found it. I don't even remember how, but the mystery was revealed. Now, of course, it's labeled on Google Maps, which would have been helpful years ago.

It's a place called Plantel Matilde which is a "collaboration between mexican artist Javier Marín and his brother, architect Arcadio Marín."

What an amazing place! It's closed to the public, you have to be invited or go on an artists retreat. So, I'll likely never see it, but it is a huge relief to find out what this mystery of the Yucatecan jungle actually is.