An October update and some choices

It's the first day of October and we have some new updates.

Yesterday, Fabián messaged and asked if we would be okay to have stone tiles in the back bedroom instead of the pasta tiles. I assume because they would match the patio stone better.

I asked Angie her opinion and was met with, "Stone patio?"

Whoops, I guess I never mentioned that?

Well, and I guess I didn't understand completely either. I assumed large stone slabs, but in the plans it clearly states that the stone would be 20cm by 20cm tiles. Reading comprehension would do me well.

Angie was not down for any of that. I guess had I known (or paid attention to the construction plans) about them being small tiles, I probably would have said no, too.

Ultimately, we were still in time to strike all those tiles down. Now all the outside patios and walkways will be concrete.

With that issue solved, we then had to decide on a color of pasta tile for the back bedrooms. After angering her earlier, Angie got the choice of color.

I reported our decision in the morning and was met with "and what about the times for the rest of the house? We want to order them this week."

Well, crap! That we were not prepared for! So, I was given the weekend to decide. 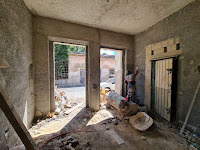 Meanwhile, new photos and video!It's exciting to see the progress on things, and sad to see the old tamarind tree now just a giant log.

Since we finished the plans, I noticed that the two bedroom windows were shorter than they were originally portrayed on the renders. I had asked right away that they be made longer to match the render and was told the change was made. 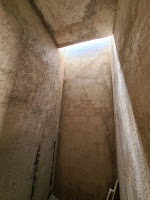 One of the first updates we had of those bedrooms being built, I noticed they were bricked up as short windows. I asked again and was told they could be made longer, again.

Then when I visited in person, still short. I asked again and was told they would be made longer but for now they were storing things in those rooms and wanted to keep them short. But do not worry, they will be longer.

So I asked again and "oh, thoooose windows." 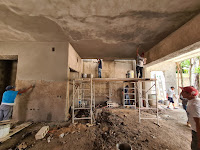 I guess what I should have done originally is used the code from the construction plans to ask for the windows to be lengthened. "Please change window 7B," that would have saved everyone some headaches.

But, we're on the same page now!

It's coming together quickly, almost too quickly it feels like, sometimes. I'm left hoping that I have made all the correct choices and am not left with any regrets on the finished house. 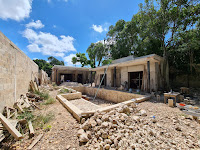 But, ultimately, it's such an amazing thought to think that when this year started there was nothing there but a lot full of garbage. That I would visit it and wade through the tall weeds, hoping not to turn an ankle or fall into some unknown hole.

And now there are fully realized buildings and a pool. Doorways and rooftops exist in this far away land and belong to us, somehow.

We return in a month and it will be so interesting to experience how far it has all come. It will be hard to leave and come home to cold temperatures as winter sets in on the prairie. Harder still a few months later when it's complete.

In the meantime, let's choose some tiles...