This is how Jason thinks solar works

This is a very condensed and basic overview of how I think solar works. I am not an expert, and you should do your own research before deciding what you would like to do. There are no perfect answers but there are some solid questions! 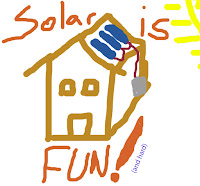 The inverter converts the DC power from the panel to AC power and sends it to the electrical panel at the house.

There are two basic types of inverters. String-inverters and micro-inverters.

They each have pros and cons and what’s right for one person is not necessarily right for another. Also, there are people out there who will cut you if you say one is better than another. It’s a pretty opinionated topic that I'm not even sure every solar installer completely understands. Sometimes it may just be whatever they sell will be the "best choice." Let's try to demystify some of this stuff without getting in the weeds or upsetting too many people.

String inverters are old school, been around forever. The ancient Egyptians first used string inverters in the pyramids which was a technology handed down to them by, you guessed it, Aliens! Or that's what Ancient Aliens on History channel taught me.

The solar panels are all wired together. Sort of like a string of Christmas tree lights, they string together and go into the string-inverter. Wow, that was a surprise, I bet! This converts the DC to AC and then poops that into your house so you can vacuum your floor, or whatever you do with electricity in your house.

There is a common micro-inverter sales tactic that says with a string-inverter, since the panels are all wired up like Christmas lights, well we all know what happens when a bulb burns out. They all go out. So, theoretically, when one panel in the series goes out, they all go out.

Then if you expanded this example to shade, if one panel is half in the shade, then all the panels produce the same half-power as the shade panel. They’re only as good as their weakest link.

Is this true? Depends on who you ask, I guess. I have seen tests run that show this isn't exactly true. Of course, these tests are run by companies that primarily sell string-inverter systems. While I don't doubt their honesty, one does need to question if they might have any confirmation bias? I'd love to see an independent study/comparison.

While it is potentially a downside, it’s probably not as dire of circumstances as you may be led to believe. You also have the option to install power optimizers under each solar panel which would minimize any downsides (assuming downsides do exist which some people swear they do not.)

That said, since you are using a single inverter, if anything happens to that inverter your entire system is offline until it is fixed or replaced. Inverters do a lot of work and get very hot converting the power and if there’s a weak link in the system, the inverter is it. They have the shortest life expectancy of anything in the solar chain. And Mexico’s poorly conditioned power grid probably isn’t going to help the longevity.

Micro-inverters are the new kids on the block. I mean, they’ve probably been around for over ten years, but that's still infant-like compared to the thousands of years string inverters have existed. Yes, I'm still running with that joke.

Right off the bat, micro-inverters are a more pricey way to go. Not like 20 times more expensive, but depending on the amount of micro-inverters it could be noticeable to your pocketbook.

So, then what’s the point of the micro-inverters? And this is the part that people will debate and mess their pants over, so I’ll just state the facts as I understand them.

Micro-inverters don’t suffer from the Christmas string problem (again, debate on your own if this is a real problem) since each solar panel is its own island of energy production. If an inverter or solar panel has an untimely death, the rest of your panels keep chugging along.

Also, since each solar panel is acting like its own entity, you can monitor each panel individually. You can see if there is a problem with a specific panel or inverter without going on the roof.

This is a plus to me because I’m a stat monkey. I like seeing pretty graphics and numbers and things happening.

If you don’t have a shady roof, you don’t give a damn about monitoring things in an app and you just want it to turn on and save you some flippin' money. If the inverter fails and you have to wait a month to get a new one, and the fact that there's a solar system on your roof doing nothing in the interim doesn't destroy your world. Then a quality string-inverter is probably a great choice.

There are other differences in the systems that I won't get into the weeds about because some of them are even more trigger causing than what we've already gone over.

Now we get to the question, what am I doing buying into this micro-inverter system?

Well, I have plans for the future of my system. A more convoluted system that, I think, can only be done with micro-inverters.

First off, I want battery backup someday. “Do you need micro-inverters for battery backup, Jason?” Glad you asked. No, you absolutely do not need them. A good-ol’ string inverter will work just fine, or maybe better.

"Why better?" Because batteries store power as DC power which is what the solar panels produce already, so ideally you can dump that power into the batteries and then when you use them it flows into the string-inverter to convert to AC. A micro-inverter outputs AC power. So, you convert the power to AC at the solar panel then back to DC at the battery then back to AC to use in the house. A lot of wasted energy during the multiple conversions.

“But hold on, Jason, then what the hell is wrong with you?! What are you doing?!”

You're full of questions today, I like it. Here’s how most battery and solar systems work in the event of a blackout. Power goes out and the house disconnects from the grid. The battery fires up and starts running things in the house.

If the battery is full, your solar panels turn off. The panels are only used to charge the battery, they cannot contribute electricity to the house directly in this instance.

And you may say “that’s fine, this is all fine” but unless you have a massive battery storage system your battery will not run your entire house. It will only run select parts of your house. In fact, your battery will likely be tied to a sub-panel in your electric system and can only run the things that are in that panel. Your fridge and modem and water pump, for instance. If you really go all out on your battery spend, maybe you can run one air conditioning unit.

The system I am wanting to install works differently. In the event of a blackout, the house still disconnects from the grid, BUT the solar panels can power the entire house directly and can even enlist the help of the batteries if need be. Or the panels can run the house during the day and turn over to your battery at night to run the select things of the house.

And I hear Angie saying “who needs this? How often are we ever going to use this? This is you getting into the weeds and over-engineering something that doesn’t need to be so complicated.”

And to this I say “you are correct, but this tiger can’t change his stripes.”

But another benefit to the micro-inverter setup is scalability. I can start with ten panels and then add a few more next year and a few more the year after that, and so on, without much change to the system.

Well, if you decide that 10 panels was fine last year, but dangit, you'd like 20 panels. Now that inverter needs to convert the combined Y-amount of power which, unless you planned ahead, may not be doable. In that case, you will need to either upgrade the inverter or add another one into the system.

This may not be a big problem for many people, but since I plan to expand my system over the next few years it's easier for me to do that with micro-inverters.

That said, this plan can also backfire. Micro-inverters are not a stagnant product and if you wait too long to expand your system there's the possibility that the new inverters on the market won't be compatible with your "old" ones. In that case, you'll need to upgrade them all or come up with other solutions.

Like I said at the top, I have never come across a perfect answer for solar. I think it's a personal decision that warrants discussion with multiple installers to decide what is going to work best for your application. Everyone is going to have their own personal bias, and that's probably the best thing to be aware of going into it all.

Good luck out there!