One permit down, one to go

The federal National History and Anthropology Institute (INAH) permit is approved and we are now submitted to Urban Development, which should be a faster process and we're hoping construction can start in 3-4 weeks.

This will put us about two and a half months behind schedule right off the bat. Again, I don't think this is a bad thing with everything going on. It's allowed me to get everyone in my family vaccinated and allowed for Angie and myself to even get vaccinated! Things are moving rapidly in the vaccine department up here in the great white north.

I still won't mark any firm construction or travel dates on the calendar until shovel has touched soil (or garbage, in our case) but we're definitely getting closer. I also am expecting other delays as things progress. There will be weather delays and there will be some boulder or something in the way that will cause a problem or who knows what. That's just the odd luck we have.

Meanwhile, I keep waiting on any news of La Plancha moving forward. It's been complicated in quite a few ways by the Maya Train project.

Will there be a station on the land? I guess?

Will there be a park? Maybe?

The land is still owned by the federal government, which is also in charge of the train project. I would assume that if the train, which is a tourist train, makes its way into the center of the city at that point, they'll want to have something in that area for tourists to see that isn't just an overgrown and dumpy pile of garbage?

Maybe that's too bold of an assumption.

The news in the area of the park has been strange and sometimes shady, but there's been a lot of it lately.

At one point, the government had allegedly sent someone out to talk to people with homes in Artículo 123 park at the north end of the skinny part of La Plancha. Telling them they would either be moved or they would need to accept certain restrictions if they stayed.

At first it seemed they may get houses in a subdivision if they agreed to move, but later it was implied they would be moved within the same area. There didn't seem to be any info about what might happen to the actual houses in that section of the park if the homeowners there did agree to vacate.

I sincerely hope they don't force any people out. There's so much land around there, it seems unnecessary.

It's wild considering there haven't been any plans submitted by the federal government on what might be built in that area. Or none that I've seen, anyways.

Speaking of plans. The federal government has rejected the plans for the park put forth by the group Gran Parque Central La Plancha. Which, I guess isn't surprising if they intend to build a station for the train somewhere in the area. Because those plans don't have space for a station, of course.

However, they rejected the plans completely and said they are going to seek out plans from "skilled" designers. Harsh.

I'm not pro or anti-train. It's of little interest to me. I have concern over ecological issues it may cause and if it will actually benefit the small communities it claims to be helping. That's something they'll have to sort out, hopefully.

My main interest is the park, for obviously selfish reasons. If the train is going to get the park built in some fashion, even if it means giving up a section for a station, then I guess have at it. I'd prefer the whole thing be a park and no station, but I wouldn't let the perfect be the enemy of the good at this point.

People have been waiting for this park for at least 25 years. My few years of waiting are nothing to it. 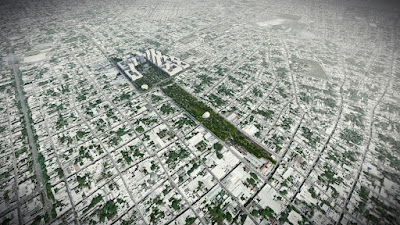