The estimate is in

Still no positive news about Angie's mom, but also nothing incredibly negative. Things haven't gone as well or as quickly as we'd have liked, of course, but we still have hope. There's some hope that once her breathing tube is removed she can start to wake up. Even though she will likely need a lot of therapy when she does wake up, it's something we're all ready to take on. Maybe, as we bring in November, the ill winds of 2020 will begin to change and we'll see a brighter 2021.

Last Thursday I spoke with the architect. It was supposed to be last Tuesday, but another hurricane moved through and disrupted things in Mérida. This time it looked like less damage and flooding from what I had seen from Delta. It's been a rough year for the Yucatan, as well.

It was tough to be excited for the call, or to really have a clear mind to ask questions. I'm not sleeping well, for obvious reasons, and just generally have everything on the back burner. All this meant that, whatever happened on the phone call, it was a guarantee I'd have to write a follow-up email asking all the questions I would inevitably forget to ask.

The phone call consisted of going over the proposed estimate line by line, describing each of the expenses. As well as discussing what it doesn't cover.

It went about how I thought it would. I was surprised that the pool was relatively cheap to build. I thought that might be one of the bigger expenses, but it was actually very reasonable. I told Angie we should just build the house out of pools.

The price was very reasonable, considering the size and amount of work to be done. It was higher than I would have hoped it to be, but less than I was afraid it might be.

It was in between "take my money and build it!" and "wow, we will never afford that." Closer to the first option, honestly.

That price doesn't include any furniture; appliances (stove, fridge, AC units); solar; water softening; or landscaping; etc. Which I pretty much assumed.

I thought about it for a couple of days and, when Angie was feeling up to it, we discussed it.

We have a certain amount of money set aside to build. The estimate is above that amount, though not wildly above it. And then we'd still need to add on the price of some of the other extras. 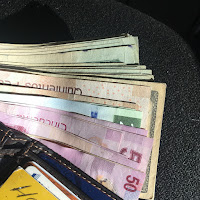 In our initial interview with the architect we had asked if building in phases/stages was possible. It is possible. It could make things more expensive in the long run, but if we avoid taking out loans I would be happier to move forward now. I hate paying interest, even though interest rates are low! This is probably foolish.

So we agreed that while Angie still really wants five bedrooms, we can live with three until we actually move down.

I didn't want to skimp on finishes, or things we really wanted in the house, in an attempt to bring the price down. I am hoping that pushing off on building the middle two bedrooms and bathroom will save us considerable money.

I did suggest a few possible changes in finishes that we were less attached to, though I don't think those will save us a lot of money, so they may not be things I stick to.

I sent an email to the architect, outlining my thoughts and questions with the hope of bringing the price closer to within our current budget.

And who knows, maybe the better solution is to keep saving and wait a few years until we have enough saved to build the whole thing at once. Or maybe the solution is just get a small loan for the rest.

Right now, it feels like making any sort of decision is an effort.