Is this the final design?

It's taken some patience and understanding but we're finally here, I think. I had come to a point where I had stopped eagerly checking my email hoping to find a new message from the architects. I wasn't sure it was going to be finished, but there wasn't much I could do about that.
Coronavirus, Cristobal and I guess the architects' general busy schedule has slowed things to a crawl. Overall, I've had to be okay with it because I want their work to be exceptional and not rushed.
I had stopped looking for their emails so much that I was reading a bunch of other emails and shockingly ignored the email from them sitting right there in my inbox. Reading and answering emails around it, seemingly not understanding what was sitting there.
Had it been so long since I'd received an unsolicited email from them that I didn't recognize it? I don't know, but it happened. On my third or fourth trip to by inbox, checking for other emails, I finally noticed it.
Like a child at Christmas I was eager to open it. I took a breath and opened it, but I didn't digest it all at once. It was a strange sort of feeling. The last time I messaged them with ideas, I had a lot of ideas. I don't know if they were all good ideas.
So I had a double edged feeling of excitement and trepidation that I may be chided for my silliness. I couldn't look. But I have to look.
Would there be a message from them telling me how annoying I am with these changes and how none of them would work out, structurally? Okay, let's look.
No messages about me being a pain in the ass. That's a good first sign.
The front was redesigned how we preferred it. I'm sure this was hard for them to change their design. Not hard in a technical sense, but from a designer perspective. They had a nice and interesting design that wasn't a typical facade, but then the two gringos decided they wanted it to look more plain and boring. Ultimately, we really wanted the house to not stand out too much from the outside. We wanted it to fit into the neighborhood and have that feeling we've had with houses in Mérida over the years. A somewhat "normal" front that pops when you open the door and you can't believe what lies behind. 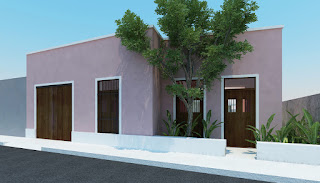 So, I think it's certainly the right decision for us. There's a lot of pink and yellow in these renderings that I can guarantee will not be in the final color choices, so you'll have to look around that. I actually don't hate the pink on the front of the house, if I'm being honest. I know that probably won't fly with Angie, though. I love the way that the white on the bottom of the front extends past and forms a low wall. I find that so visually interesting.
While the X's in the design were originally my idea (I really liked seeing them on some Mayan temples) I wasn't sure they worked in the final design. I had asked that they be removed or toned down. They really like the X's, so they'll stay, for now. I think we can come to a better compromise on them in the future. If they can be inset more and not look like they're glued onto the outside of the wall I think I'd like them more.
The X's in those screens have to go, though. They resemble lattice far too much, like an old lady's garden.
I got my "skylight" in the kitchen. I think it looks pretty rad. I think they raised the ceilings? I didn't get a side elevation from the plans, so I'm just going by the renderings.
There was another window I wanted placed but the options for placing it didn't really work out, so I was okay with scrapping it.

It's lowered again to one level, rather than having the front section raised. I actually loved the idea of that section being raised, but I was a little worried if my parents were down there they would have trouble navigating the steps.
My green roof seems to be a no-go. They said that a green roof in Mérida is not likely to survive well. I wrote them back just to make sure they understood my purpose for the green roof. I'm not looking for a green roof so I can go up there and roll around in it and enjoy it in any way. In fact, I don't plan on seeing much of it at all unless there's maintenance that would need to be done. But if it's just going to be an expensive boondoggle with no actual benefits other than my ego saying "I have a green roof!" then I can live without it.
I think everything else is pretty groovy. No real changes to speak of otherwise. Where do we go next? No idea. I guess I keep waiting.