The first layout is ready and we met with one of the architects over Skype so he could walk us through the layout.

This drawing is just the flat two-dimensional drawing of the floor-plan.

It's a much better layout than my terrible first attempt. They went to the property and measured it and the locations of the trees, etc.

Oh, did I mention the measuring part of it? There is a padlock on the gate to the property, and I needed to send a key to them to unlock it so they could get in.

Well, I only have the one key, but I thought it would be easy enough to get a single key made. It looks like any other padlock key. Well, friends, it is not. Apparently keys have nationalities as well. I went to an actual locksmith and was turned away.

So, Google to the rescue. I found a store online that sold blanks of this specific type of Mexican key. I had to order 15 of them because that was the smallest amount I could buy.

Once I had those, I was able to get the locksmith to cut a few keys. How many do I need for a single padlock? I dunno, certainly not 15, but might as well do more than one. We cut four keys and I attached two to a key-chain to send to Mérida.

"Let's get those bad boys down there!" I thought. Off to FedEx I went with two small keys and a tiny key-chain.

How much does it cost to send two small keys and a tiny key-chain internationally via FedEx? "A lot" is the answer we're looking for. $50 later and the keys were on their way. And no, I didn't expedite them or do anything fancy, that was the cheapest available option.

Had I known all of this before I started with the process, I'd have told the architects to just bill me for a hammer and a new padlock. But by that point I was all in. Expensive lesson learned.

Back to the floor-plan.

They separated out the buildings, leaving space between them to improve airflow and, I think, let the landscape keep its character and avoid cutting the existing trees.

The pool is big, and has a shallow area and steps to the side, which is a clever feature I hadn't thought of.

Ultimately, the only thing we didn't love about it was the front. Because of the large tree at the front of the lot, they couldn't build the house all the way out to the sidewalk. Which meant putting a low wall with an iron decorative fence across the top so there would be a small yard in the front.

We could probably live with that, if we really had to. But we were hoping to get the more traditional looking front on the house that came all the way out to the sidewalk.

I'll be honest, I hate that tree. I love all of the other trees. And I love trees, in general. I think it's very important for there to be more trees in the city to try and cool it down with global warming turning the city into an oven.

But that tree? That tree I dislike. It's a tamarindo tree and it drops these giant ugly poop-looking seed pods (fruits?) everywhere. Will I learn to live with that tree? I guess I will, because I have a real aversion to cutting down trees. But we will have words, that tree and me.

Still, we thought maybe the front could work around that tree. I did a little playing with the design and reworked it to where I thought we could save the tree and still get the front we wanted. 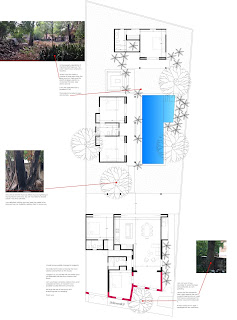 The changes I made were in magenta and really just extended the front a bit and the garage all the way out.

I'm sure there's a more elegant way to do this. Or maybe it can't be done at all. It's worth the ask.

I also pointed out a few other issues with the property that I wasn't sure if they would become problems. One is that there is supposedly a well somewhere on the property. I think it's in the center back somewhere, but I'm not sure.

The other is the tree that was either struck by lightning or burned out by a fire that was set at its base. It's a cool tree, but will need to be assessed on whether it's safe and still alive.

It's very exciting to possibly be moving forward with this. Can't wait for the next part of the process!
Also, if you're in need of blank Mexican padlock keys...