Aaaand we're back in Mérida

As we got back from our previous trip to Mérida, it wasn't long before the weather turned nasty and we were longing again for the heat of the Yucatan.

Angie said maybe it was time to stop wondering and just ask. What would it hurt if we just asked to talk to some architects and see what their response was.

What the hell, I decided, I'm just going to email one of my favorite architects in Mérida and see how they respond.

My email was very limp. Since I wasn't sure how serious we were and I didn't want to bother or waste anybody's time, I didn't send a very detailed email that contained any good questions or real reason for them to respond.

It was this wishy-washy thing where I said we'd like to build someday, maybe, hopefully and golly-gee might it be wonderful to work with them if they would even have us?

I got a response, and it was a nice response. Not the grab me by the hand response I was awkwardly fishing for, but the kind of response that terrible email deserved. It was a "yeah, if you ever decide to do this, let us know!"

Akin to saying if I ever had the actual nerve to ask them to prom, they'd be happy to take me.

While this interaction didn't really do much, it did embolden me. Angie gave me the blessing to start trying, but for real this time. Stop being so wishy-washy, she told me.

I rounded up my four favorite Mérida architects and crafted emails to each one. I sent them the dimensions and measurements of the land. I was firm that we were interested in looking into the possibility of this and maybe getting some more information about the process.

One reply rather quickly, then another and within a day I had replies from all four.

Angie then suggested I go back down for the Showcase of Homes in mid-November. Last year's had gone poorly for me when I ended up getting sick. But this time I could go to the showcase and then stay a few extra days to meet with each of the architects and discuss what we were thinking.

Great idea! Last minute, Angie decided she'd come, too. Even if it was only for a few days, it was better than staying home in the cold and snow.

And so it was that we were off again to Mérida.

We arrived Saturday evening and went straight to our favorite place from the previous visit, Zinc Comfort Food.

Sunday was the day of the Showcase of Homes. We purchased our tickets and went and relaxed in the pool until the event started. No overdoing it this year with a lot of walking before the event!

Also, we made wise use of Uber to get to different parts of the city where the houses were a bit more spread out.

It was an interesting time. There were no houses that completely fit our style, though they were all amazing! Some of the houses had little things here or there that we took away and thought "I really liked that" or "I think we'd do that differently." 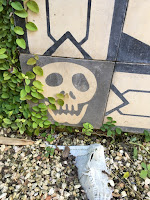 There were gorgeous details and interesting solutions to the odd shaped Mérida lots that many homes are forced to deal with.

Our house won't have those odd shape problems as it's generally a rectangle. Or maybe it's a rhomboid?

Anyways, Sunday ended up being a fun day that we didn't overextend ourselves and we ended the walk at Hennessey's for dinner.

Monday we had meetings set up with two of the architects. One in the morning, another in the late afternoon.

It was hard to sleep, for sure. Morning came and I was pacing the house in anticipation, ready to go.

We took an Uber to the first office and had a chat with the two architects. They jumped right in to asking us what we were looking for and we explained everything. Our style, how we thought we might use it, ideas for making it as sustainable as possible, etc. If we had ideas that didn't make sense for a home in Mérida, they gently told us why it might not be the best idea and what solutions might work better.

It was a great first meeting. Angie was already sold on them. I told her we still have three more to consult with, but I was happy to see her so excited and full of enthusiasm.

The second meeting was later in the afternoon. Another Uber ride and we were there.

This meeting was different (they all would be, of course.) We spent a lot of time with the architects showing us their style, projects they were working on and kind of what they were about. Then they got into asking us what we were looking for. It was a fun conversation and I really liked them. I worried a little that their style might be a bit off from what we would consider our style. A few of their projects were right on with what we love, but quite a few were a bit overly modern and alien to our taste.

Would that be a problem? Probably not, but it's something to consider. They said they'd send us some info after our talk by the end of the week. Meeting number two in the books and it was a very productive day.

Day two started with a cancellation. Well, more of a postponement. The third meeting was with the most famous architect (at least, to me) of the four and it wasn't shocking that they were busy and things came up. We rescheduled for early evening instead.

Meanwhile, the architects from meeting one had already sent us some information and a small proposal to check out. Very impressive. I like some good communication.

This was the architect I was most excited to meet. Whose style really matched my own. I took screengrabs of all of their work online for my house ideas clippings.

Then we got there and it was a little disappointing. Our meeting had clearly been forgotten about. We were shuffled into a small conference room as panicked phone calls were made and we waited about 20 minutes for the person we were supposed to meet with to come to the office.

When he got there he seemed surprised that we were bothering him with this meeting. Even though we had clearly set the meeting up. We weren't surprise walk-ins!

Once he caught his breath, he was a very nice and extraordinarily helpful. He did an amazing job of explaining the process and what to expect while building in Mérida.

In my mind, however, the damage was done. As great as I think their work is, and it is great, I am hesitant to work with an architect that didn't seem to have time for me. Especially when there are so many other great architects in the area who do seem to want to work with us.
Also, I don't want to feel like I'm constantly chasing a potentially disorganized person for over a year on a design and build. It was a bit of a defeated feeling, but Angie and me talked and they were the first likely casualty on the list.

The final meeting was the rescheduled meeting that we hurried to get to since it was now scheduled directly after the third meeting. We had to wait in the lobby for this one to start as well. Not because they weren't there or forgot, but because they are so incredibly busy.

This was the shortest of all the meetings. It was great to meet with them, but it seemed like we were small potatoes for them. We'd probably end up with a cookie-cutter design simply because we weren't in a category where we'd spend enough to really get the 'full treatment.'
That was also disappointing, in the same way the previous meeting was. I just don't want to work with people who aren't excited about the project.

While it was a dreamlike experience to sit down with them, since they were the firm that I thought many years ago we would want to hire, they were the second and most easily crossed from the list.
It was down to the final two.

Wednesday morning we got up and went to the airport for the long series of flights home. It was a quick trip, but it was a fun and productive trip.

We'd learned some things and really had a positive outlook moving forward. All that was left to do was to decide.