Back to Mérida and the discovery of Wookiee Monchis 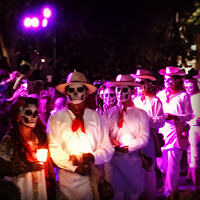 Visiting Mérida was a great relief for us. And me in particular.

We had a good chance to relax and staying in the city made it much easier to show Angie around and really help her to completely fall in love with it all. To feel the safety and the vibrancy of the city. To experience the food and the shops. And even though we missed the larger day of the dead parade, Angie still had plenty of chances to take photos and experience some of that part of the Mexican and Mayan culture.

She was able to get up close and get a good spot to take some photos. I, on the other hand, being a tall gringo was steadily shoved back farther and farther to make way for shorter people. I didn't fight it and just went with the flow so everyone could have a good time and it wasn't like my view was restricted.

It also gave us the chance to experience Green House and Blue House up close and personal, which I will get into in another post.

I would be lying if I said I wasn't walking around Mérida waiting for some phone call or some other thing to happen to ruin my experience. But it didn't happen and we had a lovely time.

I finally got to eat at Mercado 60. The food was really good. I'll admit that it seems like a bit of a touristy spot. Probably a lot of younger people traveling through and staying at hostels stopping by to have a bite to eat in a trendy outdoor atmosphere. I'm not saying that as a bad thing, either. Just saying that's the feel I had from the two times we stopped in. So, judge that how you care to.

It was still a fun place to eat and hang out. Seriously, the food that we had was great! Do I wish my Spanish was a little more advanced than it currently is? Absolutely. Especially in need of work, numbers. I am terrible at numbers, so giving the correct amount when paying is a bit of a frustration.

The house we stayed at was Casa de los Monos, which was one block away from Santiago Park. It's a nice location, kind of away from the hustle and bustle of the more busy tourist areas, but not so far you can't walk. Santiago is also a lovely park, so no complaints there. It also aided me in one of my favorite new finds.

While searching for places to eat nearby on Google maps, a small and curious pin popped up. Wookiee Monchis, with a logo of, well, a wookiee from the Star Wars universe dressed as a chef.

Am I a Star Wars fan? Yes, of course I am. I was born in 1978 and grew up with Star Wars all around me. Every time the Fox Fanfare started before any movie I was sure it was going to be followed by the infamous crawl and John Williams score blaring out. And then it would be a different movie and I would be sorely disappointed.

Of course, we were going to go try this Wookiee Monchis!

East of Santiago Park, behind the church, is what looks like a row of small storage units in a building along the street. Each front with a roll up garage door over each shop. Wookiee Monchis opens at 5 p.m. but it's Mexico. 5 p.m. is more likely the time the people who run to the shop get there, not the time it actually opens. We walked by around 5:30 and the lights were on, but the door was still down.

We walked around for a bit and strolled by again a little closer to 6. Success, the door was being rolled up and we strolled in. The walls were brick (or was it faux brick? I couldn't tell) and a television blared an old episode of Dragonball Z. Old arcade games flickered against a wall next to a small display case filled with Marvel superhero toys and anime toys mixed together.

We sat ourselves in a booth that slid around on the floor as soon as our butts hit it. The staff of two approached our table, asked if we spoke Spanish, to which I shrugged and told them I was learning and my Spanish was poor. One of the men beamed and said it would be a great opportunity for him to practice his English. So, between the two of us, we worked back and forth, my limited Spanish and his already impressive English, to explain the different things on the menu for Angie who speaks no Spanish.

The menu generally consists of burgers, wraps and waffles. All of which are named after sci-fi characters or themes. Mulder, Scully, Star Killer, etc.

I went for the waffle burger (Scully) and Angie had the waffles and chicken (Kashyyyk) and we were not disappointed at all. It was such a fun time and I wished we had some of our other friends along who really would have enjoyed it all.

A beautiful night in Mérida in a crazy themed restaurant a bit off the beaten path. I love it.

I went one afternoon on a walk that I intended to end up at Hennessy's for lunch, something I do every time I'm in Mérida. Angie stayed behind and just wanted to spend the afternoon by the pool. This is more than fine for me, since I can use my long legs to walk as fast a pace as I care to as I zig-zag my way around the city.

So, all this set up to describe that I really noticed for the first time how much the Paseo de Montejo area is the trendy tourist area of the city. Now, I guess I always knew it was a little more trendy, but something seemed different.

And yes, I've eaten at Hennessy's multiple times. We've eaten at Rosas & Xocolate. Why did it seem so different this time?

Before that moment, I always felt Mérida was a fairly straightforward city. There might be some "nicer" spots in centro, but there weren't extremely "tourist" spots. Sure, there's the general touristy spots, but nothing like a Times Square that takes you completely out of the feel of the city. You always still felt like you were in Mérida, just now you're surrounded by more people.

Part of what had me feeling this way was I was thinking more as I was walking. I generally assumed that when we bought a house in Mérida, and eventually moved here, that Angie's family would probably never visit. Well, her older sister might because she loves to travel and old cathedrals and churches. But her younger sister and her family are a little more reserved and cautious. Probably not a bad trait when you have children. Her first sight of Mérida, I've always conjectured, would result in her turning right around and heading back to the airport to claw her way aboard the first outgoing flight.

Loving Mérida requires seeing past any of her "warts." Because the surface, which can appear a bit run down in the Centro, hides such a beautiful experience. And I was fairly certain Angie's younger sister would never feel comfortable upon contact with that surface layer.

But walking along Montejo that bright afternoon I realized that this, this she would probably love. It was a little European, and a little, dare I say, glamorous. It was extremely clean and... almost sterile, in that touristy sort of way. Was it always this way? Or was it a newer rebirth? It really didn't matter. It was perfect. Not for me, to me it seems a bit too sterile, but for her it would be the greatest way to introduce the city.

Experience this almost fancy washed over experience and then we'll slowly dip her toe into the city, little by little. And by the time we're through, maybe she wouldn't think we were crazy for wanting to live here. Well, she'd still think we were crazy, but maybe not as crazy. It might just work I'm telling you.

I desperately would love to try it out with someone. Book them into a hotel along Montejo and let them spend the first few days in the shops and restaurants up and down the street. Taking in the historic mansions and having their fancy Starbucks. Then maybe we stretch over to Santa Ana. Down to the Plaza Grande. Side trip to the mercado. And boom, they've become immersed and fallen in love without knowing it!

Maybe some day. But for now I sat and enjoyed my once a trip lunch at Hennessy's. Disappointed that they gave me the English menu, but let's face it, I probably still need it. I'm not ready to remove those training wheels. Before strolling back to the house to jump in the pool and tell Angie all of my thoughts of the day.