Our first trip to Mérida, Part 6

On Wednesday, we drove to Chichen Itza and walked around the pyramid and ruins. We had lunch there and drove back. I won't get into a ton of detail on that. It's an amazing place to visit and I strongly recommend you do, but there are tons of places you can go online to give you better descriptions than I can serve up. 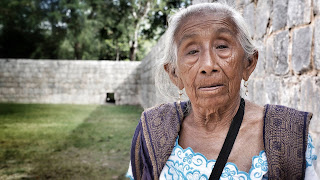 There were some people selling crafts there, and Angie bought some from this little old lady who she then asked permission to take her photo. She was very sweet.

We would spend more time relaxing at Casa Sisal and then head into Mérida later in the day for a stroll.

We stopped by Plaza Patio Merida, a mall, on the way out of town to check it out and pick up some snacks to have while we watched movies at the casa that night.

Which reminds me! This story doesn't really fit any of these timelines very well so I'll jam it in here since I think this is going to be my clearing-house post on our first Mérida trip.

We had been so used to staying at hotels and other places that provide the little bottles of shampoo, but when you are staying at someone's house, essentially, that stuff may not be provided for you. There was soap, but not shampoo. Now, no big deal, I thought. We'll pick some up next time we're in town. But every time, we forgot.

After about four days of not washing our hair in the heat and humidity of Mérida a greasy feeling overtook us both. We had to find shampoo, the grease was trying to eat its way into our skulls!
Okay, that's a bit overdramatic, but our hair was really greasy.

We drove to the nearest gas station and asked if they had any shampoo. They had one tiny bottle. The very last one. We greedily bought it and immediately went back and washed our hair. We felt normal again. What sweet relief. I can't even begin to explain how good it felt. Alternate blog post title: Shampoo, who knew?

The rest of the trip went amazing. House hunting was fantastic, and even though we didn't come away with any houses we definitely wanted to buy, besides the one we couldn't afford, we were excited about the possibilities.

All in all, despite the hiccups of the first day or so and all my fears and reservations, I came away loving Mérida even more. It isn't a perfect city, no city is, but it was still a fantastic place with amazing people that charmed the hell out of me. The reality of Mérida was a thousand times better than the celebrity.

The day before we had to leave, we tracked the staff of Hacienda Sac Chich down and tipped them all personally. William got a little more as well as some extra hugs. It was really sad knowing we were going to have to leave this place and everyone here.

The next morning I woke up early. I didn't sleep well anyways, but I was up and quietly left the bedroom.

As Angie slept I paced around the living room and kitchen. I was sad to leave. I was anxious about our upcoming drive to Cancun. But mostly, I just wanted to fill my mind with all of the details of Casa Sisal. I didn't want to forget this place or these moments we had spent in the Yucatan. I hoped we would be back again, but I wasn't certain.

A few hours later and Angie was up. We had packed the night before, so we just had to get in the car and go. We were leaving exceptionally early and would likely be in Cancun a full three to four hours before our flight was scheduled to leave. But I was not going to take the chance on any sort of delays. If the first day had taught me nothing else, it was that I need to leave some extra time.

I wasn't sure what I was most paranoid over. What if we had a flat? What if dropping the car off took as long as picking it up? Traffic? I don't know. Let's be safe.

Angie was slightly annoyed by my desire to get going, but she understood my anxiety and off we went.

I also hoped I had enough pesos left to pay for tolls on the highway and gas at the Pemex in Cancun before we dropped the car off. I was sweating the whole way but I had enough for both. In fact I had quite a bit extra, so I just dumped it into the hands of the Pemex attendant and she was more than happy to take it.

Oh, about filling gas in Mexico. I know there are a lot of tips about not getting scammed for gas in Mexico. Stations are owned by the government and at none of them can you fill gas yourself. There is always an attendant. We never experienced anyone scamming us, but I also always got out of the car and chatted with the attendant (or tried to) when I pulled up for gas. I guess it's because I'm used to filling my own gas, so it's a habit to stop and just jump out. I never just sat in the car with my window down. I think getting out might reduce your scam potential? Either way, all the attendants we had were very nice. I don't think we would have been scammed by any of these attendants anyways. But it only takes one bad apple.

Dropping the car off was easy, too. Everything was going well. We were at the airport with plenty of time to spare. We'd check in and find a restaurant to eat breakfast at the airport and wait for our flight.

The line to check in was long. We waited patiently and made way for passengers with flights sooner than ours. We had a little more than three hours, after all. Suddenly, an airline agent started going through the crowd asking people which flight they were on. We were going to Denver, we told her.

And now was when my paranoia of getting to the airport early paid off.

"Oh, no. Come over here." She led us to a ticket counter where we were informed that our plane had mechanical problems and it was going to take hours to rectify or find a new plane. We'd make it to Denver that day, but we'd miss our connecting flight back home for sure.

She checked some different scenarios on her computer and told us that they would have to transfer us to a different airline that was boarding in 15 minutes that would route us through Minneapolis instead. We were walked down to the other end of the airport ticketing counters and re-booked with some delay. They called ahead to make sure to let the plane know we were coming but they told us to run. Which we did.

At security we got split into different lines. I sailed through, but in Angie's line the conveyor belt on the x-ray scanner broke with Angie's bag right in the middle.

Of course it did.

Angie frantically tried explaining that our flight was going to leave without us, but security was pretty low key about it and explained they'd have to get someone over to fix it. Angie almost blew a gasket in the most calm way imaginable. I commend her for keeping as calm as she did. One of the other people in security eventually poked her bag through and she grabbed it and we were running again.

We made it to our gate and... the plane was delayed. We stood there sweating and huffing and puffing, for no apparent reason. It wasn't delayed long, but long enough that we didn't need to run or panic at security. We boarded our plane and because we were booked so late we were sitting rows apart. It wasn't the end of the world, but it was a drastic departure from our flight down in our fancy upgraded first-class seats.

In Minneapolis we had a long layover of four or five hours. We found a place to eat and then went to our gate and sat.

"Oh? Where is that?" she asked. And we explained it's about three hours west of Cancun. "Oh, were you on a tour bus? That sounds fun."

No, we told her, we rented a car and drove. And then drove around the Yucatan.

"Oh my goodness! Why would you do that? You could have been kidnapped or beheaded!"

There was a certain part of me that thought "oh, you poor misguided 'American.' You don't know what you're missing by being so dumb." But it was only a week earlier when I was driving along a dark highway where my mind wandered to the same dark places as her. I couldn't judge too harshly since I, too, was often guilty of being a dumb 'American.'

At the same time, there was a certain part of me that wanted to jealously protect Merida from the casual tourists and resort-goers.
We told her it was fine. We were fine, and didn't go into much more detail, but condescendingly reassured her we'd never make that "mistake" again.

And we probably would never do it again.

The money saved by flying into Cancun is quickly eaten up in either money wasted renting and driving a car to and from Mérida or in time spent riding a bus to and from Mérida. And the only other benefit of flying to Cancun, for us, is the promise of a single layover in either Denver or Minneapolis. Whereas flying direct to Mérida usually adds in another stop in Houston or Miami. But again, the time it takes to drive back and forth quickly eats that convenience up.

Flying direct to Mérida makes so much more sense.

When we finally got home it was a frozen and icy wasteland. I had forgotten how terrible it was since we had left. We looked at each other and knew what the other was thinking. This was no way to live.

But I would only experience Mérida in the online form for the next two years. Patiently hoping and awaiting my return.