Our first trip to Mérida, Part 3

We woke up in paradise.

After a stressful day of traveling, we awoke to sounds of the Yucatan and got up and strolled around the grounds of Casa Sisal. Check out my post on Casa Sisal for that story.

By mid-morning we had gotten ready and worked up enough energy to make our way into Mérida. Technically we had arrived in the area, but this was going to be the real test.

When I mentioned before about going to Mérida, how it was like meeting a celebrity you loved, well staying at Casa Sisal was like the high-end hotel you stayed at the night before you meet the celebrity for lunch. I was nervous and excited all at once.

Angie is an amazing wife and a brilliant photographer and a wonderful travelling companion, but she is a horrible navigator, even if she's holding a GPS with turn-by-turn instructions. So I prepared the GPS on my phone and kept it on my lap, figuring out which streets I would need to look for while driving. It is actually pretty easy to get into and around the city, if you're prepared.

Driving into Mérida from the east there is a rare cloverleaf interchange where highways 180 and 184 meet. Underneath the overpass on 180 is a checkpoint. Or there was when we visited, I don't know if this is a permanent thing. Usually we were just waved right on through. Only one time were we stopped and the car searched by the officers wielding machine guns. We stayed nice and polite and it was over pretty quickly.

Past that and you are on the outskirts of Mérida. 180 flows into a large ring road, the periferico, that completely circles the core of the city. To continue past it on the way to the center you must cross through a very large and busy roundabout.

As an American with limited experience with roundabouts this was slightly daunting. I was very nervous I would end up like Chevy Chase in 'European Vacation,' just stuck endlessly going in circles. Or worse, crushed by one of the trucks circling around inside of it like a shark looking for its next meal.

I had driven a few roundabouts before. There were a couple in the states and I had driven on some in Sicily. But never this large and busy. I was nervous every time we approached it, like swirling rapids in a river, but every time we sailed on through with no problems.

The roundabout washed us onto Calle 65, which we could follow all the way into the center.

Merida is an old city, and maybe that's a bit of an understatement. Many of the buildings and houses are run down or in disrepair, but it is not a "dirty" city.

I'm not going to lie, we were a little nervous driving through the city for the first time. And we had our doubts that maybe Mérida wasn't going to live up to our expectations. At least, maybe not my pie-in-the-sky expectations anyway.

This was my first trip to Mexico. The closest I had ever been was in El Paso, Texas near the border 15 years earlier where me and a friend got lost and almost crossed accidentally.
Angie had been on day-trips across the border to Nogales and Tijuana before, nothing too significant. So, all I had ever heard were internet stories and rumors and the salacious news articles about Mexico that U.S. media is all too happy to report. The movies of kidnappings and crime.

House Hunters International episodes on Mérida had helped soften my perception of the dangers of Mexico, but there was still apprehension about our safety that I couldn't shake.

I counted up the streets as we went along. In Mérida the streets that run east to west are odd numbered. So, for instance, we were heading west on Calle 65. And the streets running north to south are even numbered. As we edged our way closer to the interior, traffic started to get thicker and we joined the parade of cars slowly passing Calle 44, and then 46,48,50 and so on.

We finally got to Calle 60 and I turned on my blinker and turned right. We drove past the large central plaza, Plaza Grande, and my eyes were on the lookout. I was looking for the large 'E' signs that indicate Estacionamiento, which means parking is available.

And this is where things began to change for me, or maybe things changed back.

I was starting to have serious doubts about Mérida. Between the lousy experience in Cancun and the run-down appearance that I wasn't expecting (just to clarify, I now think that is part of the charm) even to the size of the city. I knew it was large, but I didn't realize how large it actually was. Being a somewhat socially inept person, sometimes large cities give me problems because I have intense social anxiety.

So, maybe this was the first step to bringing me back on track to finding love for this city. I had the initial fear of "maybe this celebrity isn't as cool as I thought" and I met them without all of the makeup and glamour of the TV and was a little disappointed. Which makes me incredibly shallow, I guess, but it's an honest reaction.

And now, this was like that celebrity saying hello, and I felt some warmth and started to relax and that led me to find out that, "holy crap! This celebrity is even better than all that glitzy TV made them out to be!"

And what led me to that conclusion? What burst my anxiety bubble?

One of the other big things that worried me is the same thing that is considered the biggest of life "problems" for most of us over-privileged white Americans: "What about traffic?!" and "Where are we going to park?!"
Parking along the streets, when you can find it, is free in Mérida. Or, as noted above, you can look for the 'E' signs, sometimes painted along walls that signify parking lots.

My goal was to park as close to Plaza Grande as I could and then we would explore from there. We passed Plaza Grande between Calles 63 and 61. Past 59 and 57. I was driving slow and my head was on a swivel trying to find either a side street to turn down or a parking lot. The streets in the Centro are almost all one ways, so we had to be in the proper lane if we were going to hit either a different street or a parking lot.

I let Angie think I knew exactly where I was going. In reality, I had no clue! "We're getting too far away," I panicked to myself. Even though I had tried Googling parking lots before we left Casa Sisal, I was still unaware of where they might be.

Then I saw the big E and the writing on the wall indicating it was public parking. Bonus, it was to the left which happened to be the lane I was in. Thrilled at my luck I squeezed through the narrow entrance and behold, an amazingly beautiful parking lot.

I know that sounds odd to say, but it really was. It appeared that it had been just recently built/renovated with new pavement and trees either just planted or in the process of being planted. It was also pretty much empty. I pulled into a spot and then I sat there, slightly concerned I shouldn't be parking here, I mean, nobody else was. Should I not be here? This is too perfect.

But there were some people working in the lot, and they didn't approach me or yell at me that I couldn't park there. Another couple pulled up and parked, so I figured we must be good.

Man, though, that was a nice little parking lot. I was so happy. Sure, I didn't need a super nice parking lot. I know I sound like a damn diva up to this point, and I kind of am, but I do like design and architecture and damn it, it impressed me.

We walked from the parking lot through a doorway that led us into the colonnade of a small park. It wasn't the most amazing park, but it was quaint and you could tell they were in the process of remodelling it, too. There was an ice cream shop and I think a restaurant, but the rest was still under construction. But I loved it. It had potential.

Every day we came to Merida from Casa Sisal, this is where we'd park. This was my lot, and that was my park.

Parque Santa Lucia. I'll have many more posts about Santa Lucia. It is my center. Everything flows out of there for me, and it felt like some sort of destiny. When I felt lost in Mérida (not literally, because it's pretty hard to get lost) Lucia was where I found myself. That makes me sound like a 'damn hippie!' but it really is true for me.

That first day was pretty much just a chance to walk around and find our bearings. We walked to Plaza Grande and Angie took pictures as we roamed the square. 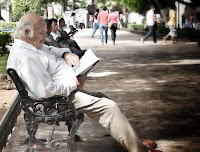 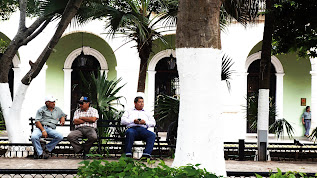 We found a grocery store so we could take some food back to the casa and make ourselves dinner and we grabbed something quick to eat at Burger King and that was it.

Yes, we ate at Burger King. The daring confidence Angie possesses for traveling the world ends at food choices. Is there a grilled cheese or chicken strips on the menu? She'll have that. In fact, just bring us your finest children's menu.
Occasionally, she'll succumb to my nagging and take a 'risk' but this day it was just a toe dip into the city and we decided it was easier to grab the BK and head back to the car.

We had a small victory in making it to Mérida and we were loving it, so let's not push our luck.

Everyone was very nice and polite, even the man in the parking lot booth where we paid was exceptionally friendly. None of the miserableness of Cancun was to be found here, so far. Even though a lot of people we met did not speak English, and we certainly did not speak Spanish, everyone was patient and helpful.

We headed back out of town to Casa Sisal to swim and relax and enjoy the day.

But also to plan. This wasn't just a relaxing vacation in the sun for us northern snow birds. I was determined to look at some houses and see if this really was where I could see myself retiring. Or was it all just hoopla? What is really hiding behind those rundown city walls? 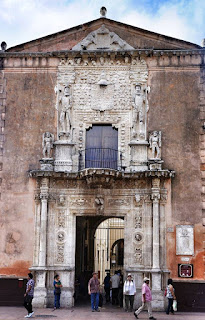